On Tuesday, Phil Simmons resigned as West Indies coach after his team crashed out in the first round of the T20 World Cup in Australia.

But as West Indies faces yet another head-scratching post-mortem, it may wonder how on earth it came to this – the only team to have won the T20 World Cup twice and now a Super 12 exit in 2021 followed by a first round ouster in 2022. West Indies has lost six of the eight matches it has played in T20 World Cups since the 2016 final win in India.

West Indies was eliminated from the 2022 edition after finishing bottom of its group in Hobart, beating Zimbabwe in its second game but losing to Scotland and Ireland on either side, an outcome Simmons has described as “unfathomable”.

Toby Radford is well-acquainted with West Indies cricket, having worked as assistant coach (batting) during Ottis Gibson’s tenure as coach when West Indies won the World T20 for the first time in 2012.

Radford feels the size of the grounds and a failure to adapt is among the key reasons for the waning of West Indies’ dominance in T20s.

“I think individual batters, and collectively as a batting unit, they need to adapt their approach and plan based on boundary sizes,” Radford told  Sportstar.

“Their batsmen can clear the ropes in some of the smaller grounds in St. Kitts, other Caribbean grounds and in Asia. In Australia, you have to be prepared to push more twos into the outfield and run hard. Creating angles with shots and hitting over the fielders at extra-cover and mid-wicket enables you to accumulate. Many sides have been doing that well in this World Cup on the bigger outfields, but West Indies didn’t seem to adopt that placement and hard-running approach.”

In the 2016 edition in India, which it won, West Indies smacked the most maximums (43) in six matches. In 2012, in Sri Lanka, it had topped the tally with 49 sixes in seven matches. But in the UAE, Windies managed only 28 sixes in five matches. So, the big boundaries and a reluctance to adapt their approach has caught West Indies napping.

The larger boundaries also exacerbated West Indies’ performance against spin in the 2021 and 2022 World Cups, where its batters had a combined average of 12.77 and run rate of 5.55. In comparison, in both the 2012 and 2016 tournaments, West Indies batters averaged 22.84 and struck at 7.2 runs an over over against spinners.

In the 2022 World Cup, West Indies collapsed from 58 for two to 116 all out against Scotland, with only four of its batters reaching double figures. Brandon King’s 62 off 48 balls was the lone bright spot against Ireland while against Zimbabwe, opener Johnson Charles, with his 45, was the only batter to cross the 30-run mark. In fact, Ricky Skerritt, the Cricket West Indies president, had taken aim at batters for West Indies’ early exit.

Radford, who is currently working as batting consultant with Pakistan Cricket Board (PCB) and England and Wales Cricket Board (ECB), also feels West Indies’ success in the earlier World Cups was due, in part, to a very well-balanced and highly talented side.

“That team had world-class players running through it,” he says. “Top class spinners, highly talented all-rounder Dwayne Bravo, batsmen like Marlon Samuels who could build an innings and launch when the time was right, alongside huge hitters Chris Gayle, Carlos Brathwaite, Kieron Pollard and Andre Russell.

“Like Marlon, Lendl Simmons played pace and spin well (with good footwork) and kept the run rate up in the middle overs – that didn’t happen in this World Cup. The side certainly lacks the mystery spin of (Sunil) Narine and the skiddy, difficult-to-score-from control of a Samuel Badree. There is also no Marlon equivalent when early wickets fall, a deficiency to manipulate spin and a scarcity in number of genuine power hitters.”

West Indies does miss the vast experience and sheer power-hitting ability that players like Pollard, Gayle and Bravo brought to the side by featuring in T20 leagues across the world. Gayle (1056), Pollard (794) and Bravo (334) have struck a mindboggling 2,184 T20 sixes between them, so far. 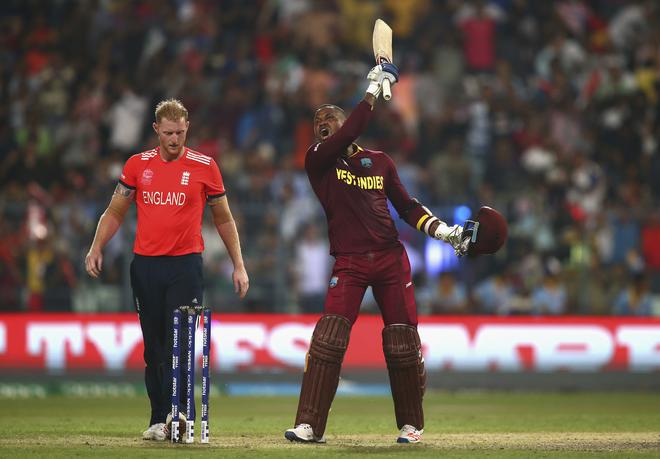 Russell and Narine were ignored for this World Cup after Narine “seemed that he was not interested,” according to chief selector Desmond Haynes, even though Narine recently said, “I’d still love to play for Windies.”

Russell was omitted because Haynes said, “We’ve just decided to move on”. Left-hander Shimron Hetmyer, a proven finisher in recent times, was left out of the squad after he missed his rescheduled flight from Guyana to Australia. Cricket West Indies eventually named Shamarh Brooks as replacement.

There were some plusses in bowling, but those were few and far between. Alzarri Joseph looked good and bowled quickly; his pacy and accurate yorkers earning him a four-for against Zimbabwe. Jason Holder, too, offered great control and occasionally created problems with movement and bounce. But away from them, the pace attack was inconsistent, bowling too many bad balls with no clear plan. The spinners lacked incision.

When West Indies won the title in 2012, leg-spinner Badree took four wickets in four matches at an astonishing economy rate of under six. Narine was the highest wicket-taker for West Indies with nine in seven matches at under six. Badree was again in the thick of things in the 2016 final — when his figures of two for 16 helped restrict England under 160. Clearly, the ebullient batting of the previous West Indies sides was matched by Badree’s guile, Narine’s knuckleball, and Bravo’s slower balls at the death. The present team does not enjoy the same luxury.

After West Indies’ exit from the 2021 tournament, then captain Pollard had said, “We need to have [a] tournament other than CPL (Caribbean Premier League), where we can unearth new talents. When we had the Caribbean T20 [which ran from 2010-13, without overseas players], that was an opportunity to bring you talent from different parts of the Caribbean to be able to have the nucleus for this last generation or so… Since CPL has come in, yes, it’s a franchise-based system, but we’ve only had the opportunity to recycle the same players over and over again.”

But Radford doesn’t think the issue is to do with the lack of feeder tournaments. He believes West Indies needs to invest more in the development of its cricketers – to up-skill its current players and develop its stars of the future – to invest more in its training facilities, coaching and high-performance programmes across the region.

“Make sure selection is as close to right as possible – that the team has a good “cover all bases” mix and that every match selection takes into account specific surfaces, ground dimensions, and opposition,” he says.

“Plan and prepare for each match and opposition as thoroughly as possible. Have clear strategy and individual roles for all players. Leave no stone unturned in preparation to give the team the best chance of success.

For medium and longer-term success “invest in the grassroots and facilities for the medium and longer term. Have a year-round high-performance centre to provide top-quality coaching and sports science support for current and future international players.”

The shades of West Indies’ glory years in T20Is were nowhere to be found throughout their last two World Cup campaigns. West Indies’ domination of the game from 1976 to the early 1990s was so complete and ruthless that the new generation of cricketers seem overburdened by the brilliance of their predecessors. Watching West Indies play in this World Cup, Radford felt they lacked energy and dynamism. “It was almost as if they didn’t believe in themselves or that they were playing in fear. Batsmen didn’t leave the crease (and then tried to hit themselves out of trouble after a string of dot balls), and the bowlers were tentative and couldn’t hold a line or length,” Radford says.

“The successful sides had a swagger about them. They looked to dominate. They knew they were good, and they told you. Bravo even sang about it – “Champion”! When those guys played, they stuck their chests out and wore a smile as big as the gold chains around their neck. Sadly, this team has looked very timid and limp in comparison.”