“Where should we begin?” Jason Warne asks as I turn on my recorder.

We are at the Middle Park Hotel on Canterbury Road, a quaint suburb in Melbourne, on a Tuesday afternoon. The sun plays hide and seek outside; the light rail is passing by the Middle Park station every now and then, and sitting at one corner of a relatively empty bar, Jason looks emotional.

It’s been seven months since he lost his elder brother, a dear friend and one of his ‘fiercest competitors’ – Shane Keith Warne!

He hasn’t been to the Melbourne Cricket Ground since March but has slowly started watching cricket again on television. However, when Australia takes on England in a T20 World Cup game, Jason plans to visit the ‘G’ because “Shane would love it”.

The T20 World Cup, so far, has been a weird feeling for Jason and the family because they are yet to come to terms with the fact that Warne is not around, at a time when Australia is hosting one of its biggest cricketing events.

“For me, it’s weird. My whole adult life, 30 odd years, whenever I have watched cricket, he was either playing or commentating. So, watching the World Cup will continue to be very weird,” Jason says.

Warne was hardly a couple of years elder than him, and both the brothers wanted to be sportsmen. “He made it and I couldn’t. It’s as simple as that,” Jason says with a smile.

Sipping on his glass of sparkling water, Jason reveals how both the brothers wanted to pursue Australian rules football.

“He (Warne) wanted to play Aussie rules football too, initially. But unfortunately, he was a full-forward, really good mark but he was too slow and too short,” laughs Jason.

“But he had all the skills. He knew how to play, but did not have the physical attributes to match his skill sets in Australian rules football. That’s one of the most brutal things about the AFL (Australian Football League). It’s incredibly athletic and in certain positions, you just need to be tall to play…”

“The way he played, he was soon to be a full-forward, but he wasn’t tall enough for that position..” Jason says. Written in the stars: A lover of AFL, Shane Warne, eventually turned out to be one of the greatest cricketers Australia has ever produced.
| Photo Credit: Getty Images

But even then, Warne’s love for AFL was not lost. The two brothers would talk about the game, and follow each and every fixture closely, but slowly, Warne moved towards cricket.

Hard to put this into words. I first met him when I was 15 at the Academy. He gave me my nickname.

We were teammates for more than a decade, riding all the highs and lows together.

Through it all he was someone you could always count on, someone who loved his family… pic.twitter.com/KIvo7s9Ogp

The brothers would play at the driveway of their home in Black Rock, a Melbourne suburb, and would call their teams ‘World XI’.

“So, the World XI would play at the driveway every day,” Jason says with a smile, “He would clear the road so that our World XI match could begin. The rules of the game were very simple – you had to imitate the playing style of your favourite cricketer and play like him…”

So, there would be days when Warne would imitate the batting style of Allan Border. The very next day, you would find him taking a stance like some other legendary cricketer. But even in those friendly games, Warne hated to lose.

‘Everything was a competition’

“For him, everything was a competition. Everything,” Jason says.

While Warne was ‘any day’ a better cricketer than him, Jason, by his own admission, was better in studies.

“He would just play football and never worked hard with his studies. For him, studies were always secondary to sports. For him, everything else in life was a competition and he had to be the best,” Jason says.

“It came as far as splitting a box of barbecue shapes growing up. Even then we had to take turns deciding who split it, and we split it between the box and the bag, and we always tried to trick the other one into picking the worst one. Everything was a competition…”

Jason remembers Warne couldn’t even have a swim in the pool without turning it into a game. “We were just like normal brothers, we played cricket up the driveway, we tormented each other, we teased each other, and also wanted the best for each other,” he says.

“But that’s just the nature of being brothers, you always want to be better than the other one. It doesn’t matter what you’re playing. And it’s always harder being the younger brother, but at the same time, it makes you better as well because you are trying to keep up with your elder sibling… and of course, the older sibling cannot stomach losing to the younger sibling. So, it was great fun,” adds an emotional Jason, walking down memory lane.

While Warne led a colourful life, Jason believes that he never really changed.

“He never really changed, and that’s really something about professional sport, especially if you reach the top at a really young age, it’s really no different than being in the first eleven at school,” he says.

Whilst people expect sportsmen to become pillars of the community, role models and all the rest of it, the way it’s actually structured allows them to still be kids. So, it’s like a conflict,” Jason laughs.

Younger days in your career are like being in school, you can get away with anything. What you saw of Shane, especially in the first half of his career, was just him…”

But what about the second half of his career?

“That’s still him, but yes, then you have a family, kids. But since we are talking about growing up, I think the first half of his career was no different to being a teenager. In the second half, he started having the responsibility and grew…

“There are a lot of athletes, especially in a team environment, who mature later but there are expectations from them to show maturity at a much younger age. So, it’s tough…”

Warne was carefree. He loved living his king-sized life, both on and off the field. The bad press did not matter to him, he wouldn’t always care about what was being talked about him. He lived on his own terms.

“He was always like that. Sportsmen often spend a lot of money, a hell of a lot of money, with mind coaches trying to block out all the external noise and just focus on the moment. 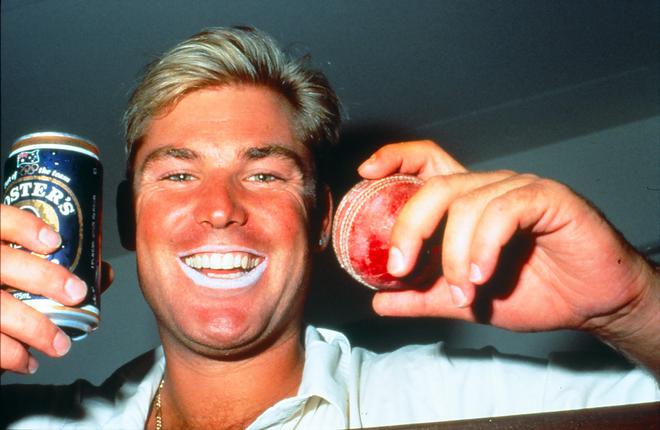 Living life king-size: Shane Warne celebrates with a can of beer in one hand a cricket ball in the other, after winning a test match with Australia.
| Photo Credit: Getty Images

Shane was wired differently from most people; he actually could only focus on the moment. And I think that’s a trait you will find common among really successful sportsmen and businessmen,” Jason says.

“He had an ability to just walk onto the field and not think about anything else other than getting the batsman out or what needed to happen to win that game, that was just the way he was wired.

You may ask how could you do that. In his case, he couldn’t do that. Unfortunately, that caused some issues off the field, but he didn’t think about the consequences of his actions. That’s just the way he operated…”

When he was hardly 14, Warne had a near-death experience. “He went to jump off a pier and slipped because it was wet. He hit his head and was floating face down in the water and one of his friend had to pull him out, otherwise, he would have drowned. The idea of it going wrong didn’t enter his mind,” Jason says.

He tries hard to keep his emotions in check and then slowly adds, “We are extremely grateful to Dave for giving us another 38 years to spend with him…”

Just like everything else in life, Warne had a similar approach on the field as well. “If he’s bowling to someone like Australia needs a wicket, the other team needs four runs to win, he is just thinking about how he is gonna get this guy out. He doesn’t think about it going wrong and the other team getting a six, so he just thinks about getting him out. So, he stays focused on what he needs to do to do that because the idea of failing isn’t an option to him…”

Jason was Warne’s manager for about six years. But with work commitments and a busy schedule, the communications were irregular over the last few years.

“From being brothers to working together, we were very close. We set up his foundation in the early 2000s and then I gradually moved on to my own work. Possibly for the last ten years of life, we possibly did not speak that often. There was a time earlier when we would speak daily. But now, when I look back, I think maybe, I should have kept closer contact,” Jason says. Shane Warne shares a toast with his brother Jason (left) and father Keith (R) after taking the Australian record for the most test wickets of 356 at Eden Park on the final day of the National Bank test between New Zealand and Australia. Australia won the match by 63 runs.
| Photo Credit: Getty Images

While his parents still stay at the Black Rock residence, Jason makes it a point to meet them at least once a week, take them out for a meal, and help them with the errands. Now that Jason has two children – a daughter, who just graduated from college and a younger son, who is into music and is pretty popular in the digital space as a Bass player.

Watching them grow up brings back so many memories for Jason – of Warne, their home at Black Rock and of course, the banters the two brothers had in their formative years.

So, who was the parents’ favourite?

Jason pauses, takes a sip of sparkling water and laughs.

“As parents, if your son is going through the life that he was going through, you would be incredibly proud. They went all over the world to watch him play and made quite a few good friends along the way.

I have got two kids now and I am proud of what each of them is doing, but you have to have a favourite at times,” he says, adding: “Mom and dad were proud of what he did…”

Jason was in India in May as part of a remembrance programme organised by Rajasthan Royals – the IPL franchise which won its only title in 2008 under Warne’s captaincy – and during the tour, he even travelled to Ahmedabad to meet the BCCI secretary Jay Shah.

Jason was touched by the love and affection that the people of India showed to the family during the tough time.

As we walk out of the bar, it starts to drizzle suddenly. There’s a chill in the air. It’s suddenly lonely out here without you, Warnie!