A slew of box office disappointments in recent times has led the industry to sit up and take notes on what needs to be done to revive the magic of cinema. Among the many Bollywood releases this year, at least twelve films are remakes. Whether theatrical or OTT release, it is evident none of them struck a chord with the masses. Whether it was Aamir Khan’s Laal Singh Chaddha (remake of Forrest Gump) or Hrithik Roshan-Saif Ali Khan-starrer Vikram Vedha, or even Akshay Kumar’s Bachchhan Paandey (remake of Tamil film Jigarthanda), none managed to send the cash registers ringing. The business from Shahid Kapoor’s Jersey, Rajkummar Rao’s HIT: The First Case, Taapsee Pannu’s Dobaaraa (remake of Spanish film Mirage) was disappointing as well. It is too early to seal the fate of Ajay Devgn’s Thank God that released last week, but the film certainly has not made the splash that was expected from a Diwali release. Not many would know that the film is a remake of Danish film Sorte Kugler. Janhvi Kapoor’s Good Luck Jerry (remake of Tamil film Kolamaavu Kokila) and Akshay Kumar’s Cuttputlli (remake of Tamil film Ratsasan) headed straight to OTT, but failed to create the impact like the original ones did.

The year 2022 will see three more remakes hitting the silver screens – Janhvi’s Mili (remake of Malayalam film Helen), Ajay’s Drishyam 2, and Ranveer Singh starrer Cirkus (based on 1982 film Angoor which itself was a remake of 1968 film Do Dooni Chaar). The year 2023 too has several big ticket remakes lined up for release – Akshay-starrer remake of Tamil film Soorarai Pottru, Kartik Aaryan’s Shehzada (remake of Telugu film Ala Vaikunthapurramuloo), Akshay and Emraan Hashmi’s Selfiee (Remake of Malayalam film Driving License), Ajay’s Bholaa (remake of Tamil film Kaithi) among others. Which means, Bollywood is not giving up the idea of recasting and replicating successful films for a different set of audience. At least not yet.

Today’s #BigStory seeks to explore where Bollywood is going wrong with remakes, whether the trend of remakes is slowly approaching a dead end, what lies in the future of Hindi cinema and more. Read on.


Bollywood has been doing remakes since decades. And more often than not, the remakes did find an audience. Film critic and trade analyst Taran Adarsh points out, “Ram Aur Shyam was a remake of Telugu film Ramudu Bheemudu. But earlier, the films weren’t getting dubbed in Hindi. So they would always get viewership and acceptance.”

“We are still doing remakes, but the problem arises when people have already watched the dubbed versions available on digital platforms. So they already know about the story. Why will they pay to watch the remake? That’s exactly what happened with Jersey and Vikram Vedha,” he adds. 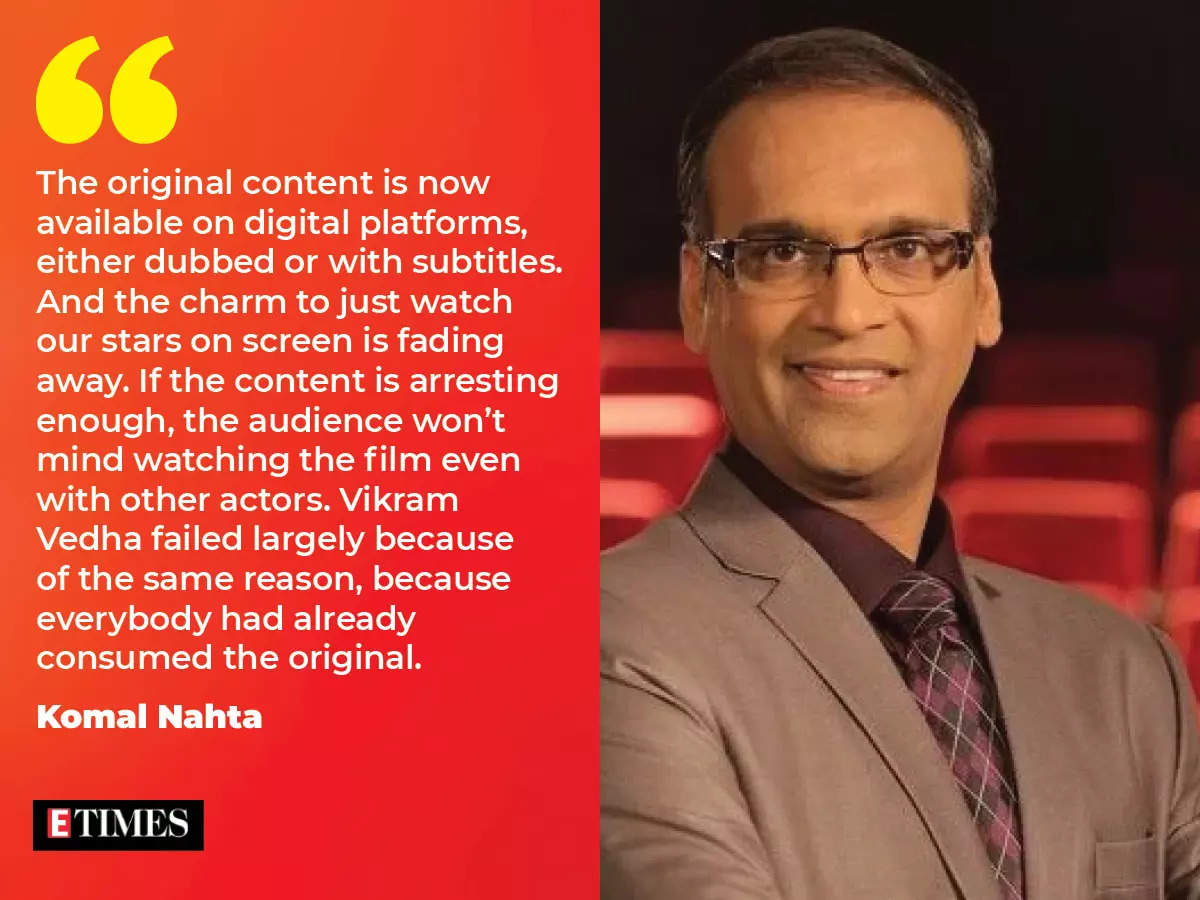 Trade analyst Komal Nahta agrees, “The original content is now available on digital platforms, either dubbed or with subtitles. And the charm to just watch our stars on screen is fading away. If the content is arresting enough, the audience won’t mind watching the film even with other actors. Vikram Vedha failed largely because of the same reason, because everybody had already consumed the original.”

Earlier in the week, ETimes exclusively reported how makers of Ajay Devgn’s Drishyam 2 had to pay a hefty amount to Goldmines Telefilms owner Manish Shah so as to not release the Hindu dubbed version on YouTube before their film’s theatrical release. Kartik Aaryan’s Shehzada too was saved from a similar sabotage earlier.

Sanjay Gupta notes in this age of the internet, people have access to every possible conceivable cinema in every language. “So I think the very idea of doing a remake of a film that too of Indian origin into another Indian language defeats the purpose. Since most of these films are dubbed in Hindi and are available and people watch them and invariably compare the original to the remake,” he says.


Not every other language film may find a Hindi audience. Seasoned filmmakers and film analysts unanimously agree filmmakers need to carefully choose the subjects while doing remakes. As Adarsh notes, “Simply copy-paste work will not work. That’s where we are going wrong. Say for instance Laal Singh Chaddha – the subject itself was wrong for the Indian audience. It’s not that if a Hollywood film has won an Oscar, we do a remake and it will work. I think you should take the soul and change the rest while remaking.” 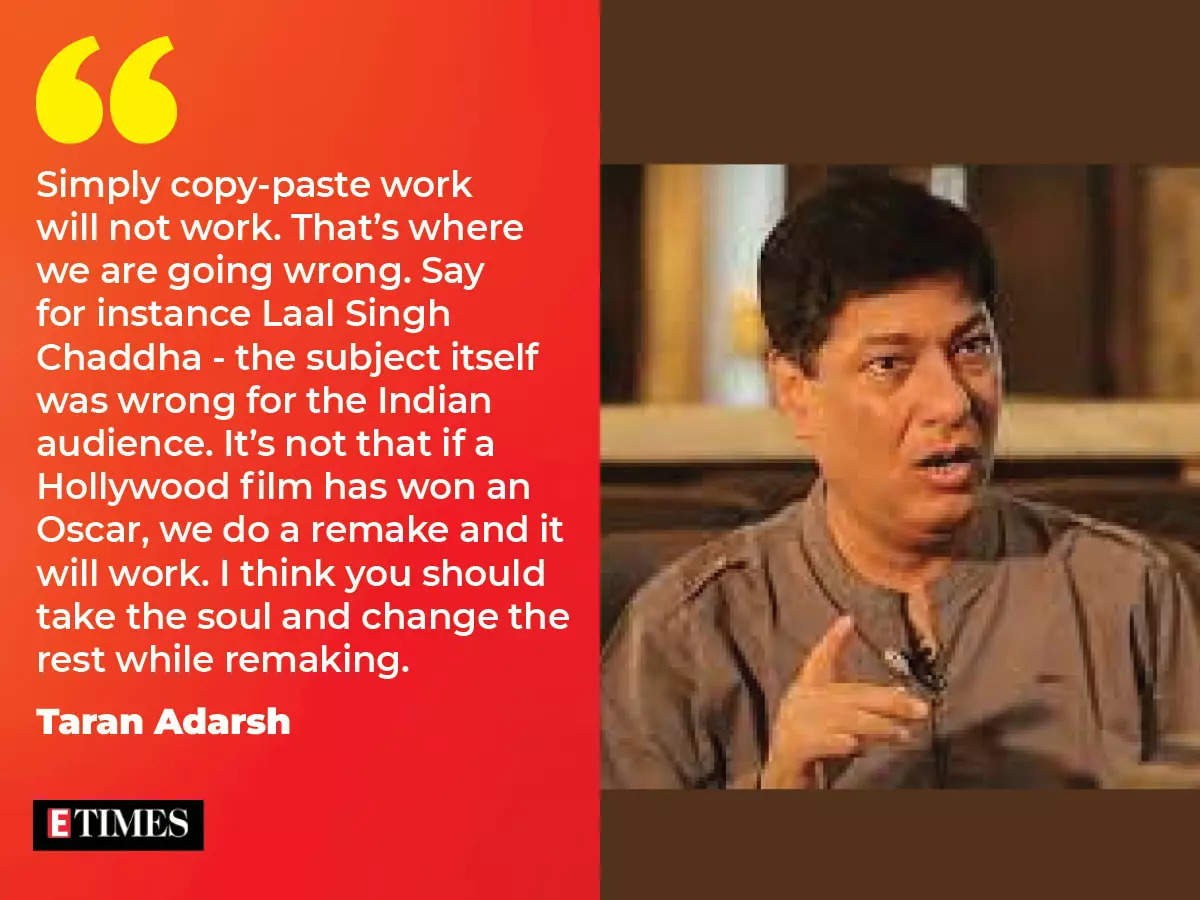 Filmmaker Vikram Bhatt has directed several films that were based on Hollywood films – Ghulam (based on On the Waterfront and Kabzaa), Raaz (based on What lies Beneath), 1920 (based on The Exorcist) to name a few. He echoes the sentiment and says, “When anyone is doing a remake, one has to see that remake is going to be specific to the target audience. For instance, in the case of Laal Singh Chaddha, Forrest Gump was very specific to American cause and history. It would have probably been a good film for the Indian audience, but not at the budget with which it was made and not with a big actor like Aamir Khan. The tragedy of being a very big star is that when your name is attached to a film, automatically the film becomes big and people expect big returns. So they cannot play roles that their heart wants to play, which is the hard truth. Stardom comes with its own givings and misgivings. When we are remaking films, we should be careful what our audience wants and whether they want it. Just because a film has become successful in some part of the world does not mean that it will become successful in India.” Boney Kapoor has produced some of the very popular remakes like No Entry, Wanted, Nerkonda Paarvai (Tamil remake of PINK), Veetla Vishesham (Tamil remake of Badhaai Ho) and his next Bollywood film starring daughter Janhvi Kapoor, Mili, is a remake of Malayalam survival thriller Helen. “One of the reasons why Hindi remakes of some of the South films aren’t working is because they are simply copy-pasted,” he notes. “Even the titles are kept the same as the original, as in the case of Vikram Vedha and Jersey. Also While remaking South films, one has to add the north indian nativity to suit the Hindi audience. You have to make a film which will be accepted pan India.”

Vikram Bhatt believes Hollywood does a good job of remaking films. “They remade Infernal Affairs as The Departed, with Martin Scorsese. They knew that it was a very American story though it was made in Hong Kong, and it did well. They had also taken some horrors from Korea, Japan and made films like Ring and Grudge that did well. So they know what their audiences want,” he says.

The essence of the original


One cannot deny Bollywood has had some really good remakes. Nahta particularly cites how well Rajshri remade their own Nadiya Ke Paar into Hum Aapke Hain Koun..! “Singham was a super duper hit remake. But yes, often we go wrong when we try to change and adapt it for our audience,” he says. “You need to understand why the original worked and then when you change, you should not change that particular underlining factor that clicked with the masses. Sometimes it is a case of ‘lost in translation’ because the basic understanding of why a film has clicked is not there. This is followed by wrong correction, wrong alteration… The essence of Forrest Gump didn’t come out well in Laal Singh Chaddha. So it turned out to be a sloppy remake.” 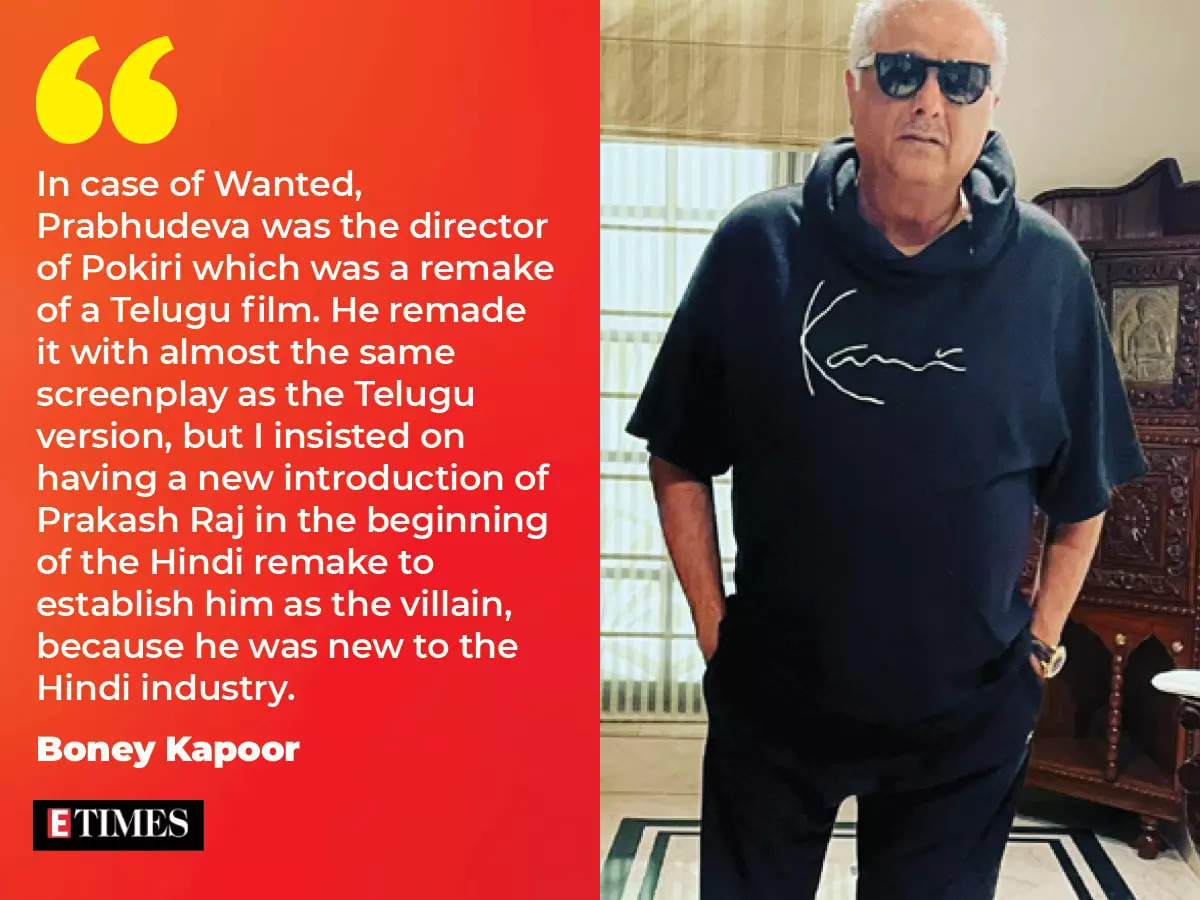 Boney Kapoor recalls how much work he had put in even as a producer while adapting South films for the Hindi audience. “When we remade the Tamil film Charlie Chaplin as No Entry in Hindi, a filmmaker made the same film again in Kerala which has a good Tamil market, with our screenplay! In the case of Wanted, Prabhudeva was the director of the Tamil version Pokiri which was a remake of a Telugu film. He remade it with almost the same screenplay as the Telugu version, but I insisted on having a new introduction of Prakash Raj in the beginning of the Hindi remake to establish him as the villain, because he was new to the Hindi industry. We went all the way to Bangkok to shoot his new introduction for our Wanted. We wanted to show what kind of villain he is, to establish the cruelty, the sharpness and his mindset,” he shares.

Boney will be soon teaming up with Anees Bazmee for the sequel of No Entry titled No Entry Mein Entry. Bazmee’s last film Bhool Bhulaiyaa 2 was a standalone sequel to the popular remake film Bhool Bhulaiyaa. Although it was an original script, Bazmee retained some elements from the original like the background, the atmosphere, the ghungroo sounds and props and effects that would remind the audience of the original. “We’ve had great remakes in Hindi as well. It’s just fate that some films that worked in the South didn’t work here as a remake,” he says. “During the pandemic, the audience has consumed a lot of content on the digital platforms. So maybe we can say that the taste of the audience has evolved and we need to think in that direction. Whenever I have remade South films, I have brought in a lot of changes because the sensibilities of South are different from here and it makes a lot of difference. Not to say that this is the only way to do remakes, but this is what I feel is right and the one that I know.” Are pan India films a solution?


While we’ve had remakes, dubbed versions and subtitled versions for long, pan India films are the flavour of the season. But can filmmakers look at pan India movies as a solution over failing remakes? Sanjay Gupta’s answer to the question is a straight no. “This whole concept of pan India movies is highly overrated,” he says. “Apart from three films (Baahubali, RRR, KGF), no other film has done great business pan India. All three movies were well deserved, they had their unique quotient, a new way of storytelling. So they worked. But post that, it’s been months no other South film has worked pan India.”


Could the fate of recent remakes at the box office hint at any conclusion? Or is it too soon and one must wait for the upcoming Mili, Drishyam 2 and Cirkus that look hugely promising? Komal Nahta does not think so. “The remake trend is on the verge of the end because now you cannot stop people from watching content in the original language. So remakes won’t be that popular anymore,” he notes. “And when remakes are not commercially feasible, why will people buy rights? So now there will be pan Indian films like RRR, KGF. Kantara was a Kannada film, but because it was made in multiple languages, it got accepted by a wider audience.”

Sanjay Gupta adds, “We are well aware that hardly any remake has ever surpassed the original because there is a charm of the original film. I feel in the current scenario, it is not advisable to remake South film in Hindi or vice versa. I don’t think that’s working and somewhere the audiences are also upset and put off by the fact that we are remaking films. Because they think that on our part, this is we being lazy and lethargic. They feel that we are not pulling up our socks and not putting our best effort and not doing all we can. So yes, I think for the time being or even otherwise remaking films in this age is not a wise idea.” 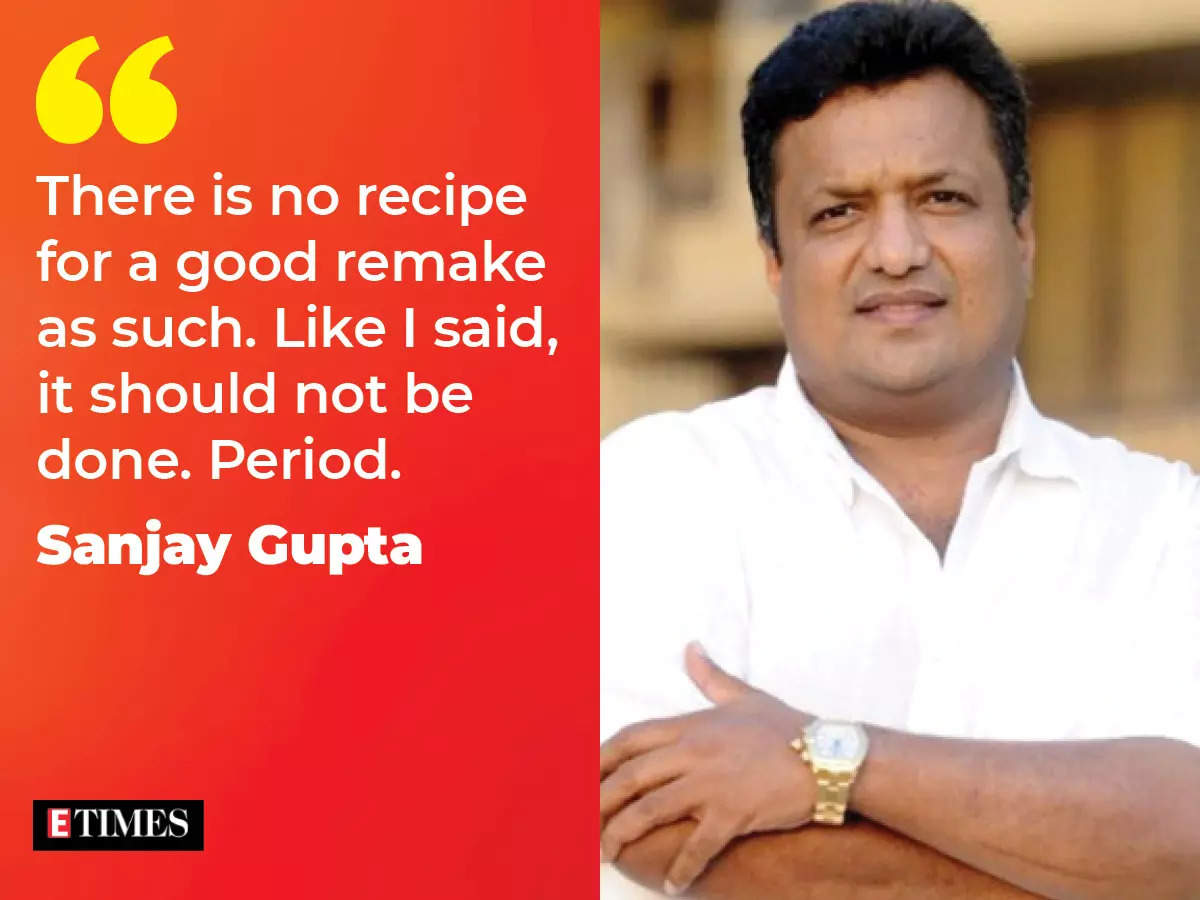 Anees Bazmee tells us point blank, “I don’t want to do any remake.”

And in Gupta’s own words, “There is no recipe for a good remake as such. Like I said, it should not be done. Period.” 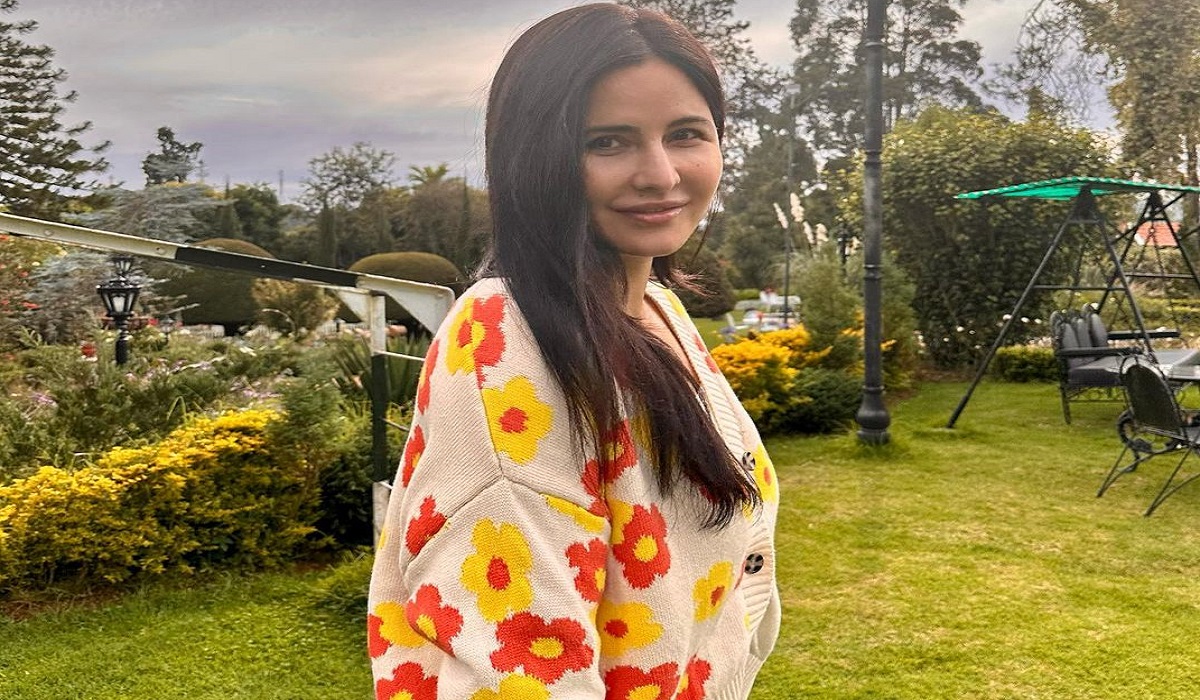 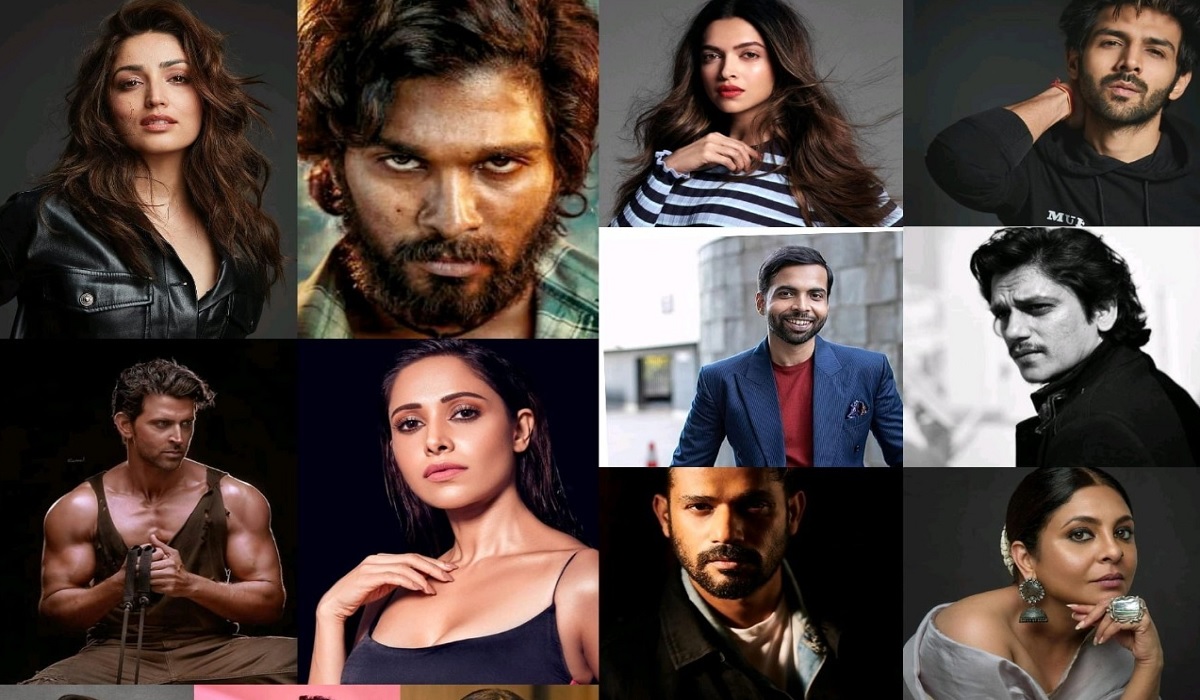